This is a TV stand "that isn't". The design has been so cut to the bone, that there's only the structure left. Updated May 2017 During the design process, I knew that this extra TV set should be viewed from either a sofa at rather short distance (2 m) or from the floor on pillows with grandchildren, but also from some chairs at a straight angle (3 m). It should also be possible to push it away under the work bench, which we didn't want to lose.

Television sets these days have speakers from the travels to the moon in the sixties. So, I bought a small set of active speakers that in a snap turned the system to a home cinema. Well, almost.

At first I though I should make a more regular rack with two levels, so that the TV could be liftet up. Even if the viewing angle now is a little more downwards than ideal, I dropped it. No matter how I twisted the design I did not get there. It got too complicated and too clumsy. It's not a daily set, so it's ok.

So, I made this frame that the speakers virtually is held onto. I found two steel sides from an Ikea hat rack from an earlier project, where only the steel tubes were used (not in the catalogue any more). They now are the small "shelves" (20 mm) at the bottom left and right sides - and the rest are the "arms with hand" that hold the speakers. Even if the weight difference is almost one to two, there is enough friction and static "moment lines" to keep them 15 mm above the floor, enough for the carpet to pass under. The final arm length is adjusted with two wing screws. I did not have to fasten the arm to the rest of the structure. All contact with the laquered speakers is protected with rubber.

The TV is placed and held in the structure, in the front, one on each side in the back, and the special piece in the center, back. The hole in the front is for fingers, but the TV base may also be held, even when the rack is pushed or pulled around. I glued felt underneath, which makes is easier to drag than I thought.

Since there is no bottom front, there is place for the feet while we sit at the bench, and want to forget about the TV. I will find a little more protection for the speaker membranes, even if that's really not where the feet would naturally be. I'll hide it behind the front covers.


There is a Blu-ray box that also takes care of internet connection not seen in the pictures, by a HDMI cable. The box sits fine in a book shelf. On the picture it streams the video of Norwegian jazz singer Solveig Slettahjell who sings Tom Wait's "Take It With Me" at the Oslo Jazz Festival in 2010: http://youtu.be/Q60YUnpbbHQ, from NRK 1 tv. Now, that's a favourite!

The central piece with the round hole is part of an obsoleted & never used Ikea cutting board. The TV is a 32 inch, 16:9 set.

If I were to make this prototype again, the lists may have been some (2 mm?) sleeker. Of course, birch would have made it more elegant than spruce, but not in that room. Also, the vertical lists on both sides should pass through the horizontal list aup to the end of the speaker. This would shortcut the crosssover moment, to make different speaker weights almost irrelevant.

UPDATE. I needed to add a shelf for a combined DVD and Blu-ray player (the old one broke) plus an Apple TV. I had decided to make this rack hold all gadgets. Even if I did come home with the least wide DVD/Blu-ray player in the shop it was just too wide. So I unscrewed the base (possible since I hadn't glued anything) and aligned the center piece two cm to the left. Only noticeable if you know it. I then was able to have both units fit on two small shelves - again made by plastic chopping boards. In my shop these are material. Here's a picture of the 2017 add-on: 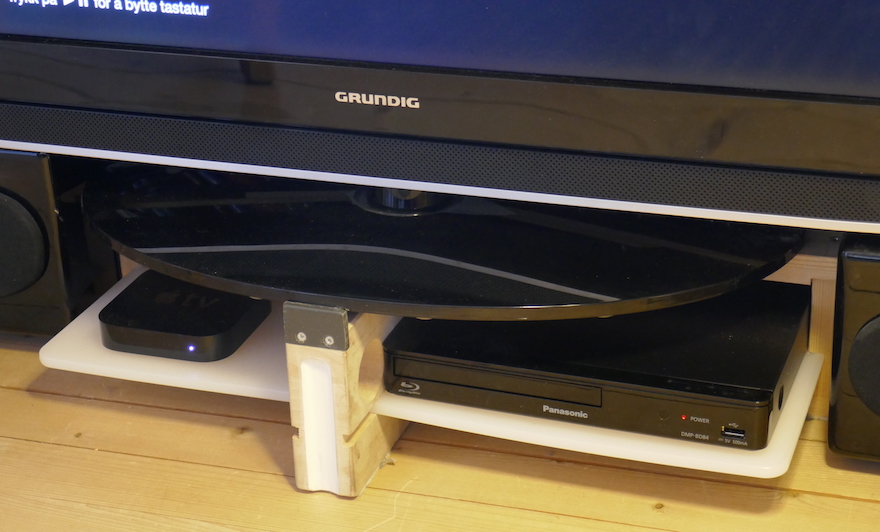 Email ThisBlogThis!Share to TwitterShare to FacebookShare to Pinterest
Labels: 033